ALASDAIR GRAY’S LANARK: A WORLD MADE ON PAPER

This new Hunterian exhibition is dedicated to the work of renowned Scottish writer and artist Alasdair Gray (1934–2019).

Alasdair Gray’s Lanark: A World Made on Paper marks the 40th anniversary of the publication of Gray’s first novel, Lanark: A Life in Four Books. Published in 1981, it is considered to be one of the greatest masterpieces of 20th-century Scottish literature.

The two-room exhibition uncovers how Lanark was made and has been selected from the manuscripts and artworks created by Gray throughout the development of the novel that spanned three decades.

Highlights include the artist’s design for the jacket cover of Lanark and designs for the title pages of the four books. Also featured are just some of the varieties of found, recycled and repurposed sources of paper on which the manuscript was drafted and re-drafted, which include Gray’s personal notes, illustrations and detailed instructions to his typists.

Gray’s work on a larger scale, beyond the images associated with the making of Lanark, is also represented through works such as ‘Blossom and Diane’, ‘The Artist’s Family and Friend’ and his portrait of Scots Makar Edwin Morgan, ‘Portrait of EM (Edwin Morgan) (1920-2010)’.

The manuscripts and artworks that feature in the exhibition were given by Gray to The Hunterian and the University of Glasgow Library, Archives and Special Collections. A selection of other works on paper by Gray, also presented to The Hunterian by the artist, is included. Most of these works have never been exhibited.

No booking is required. Entry is free. 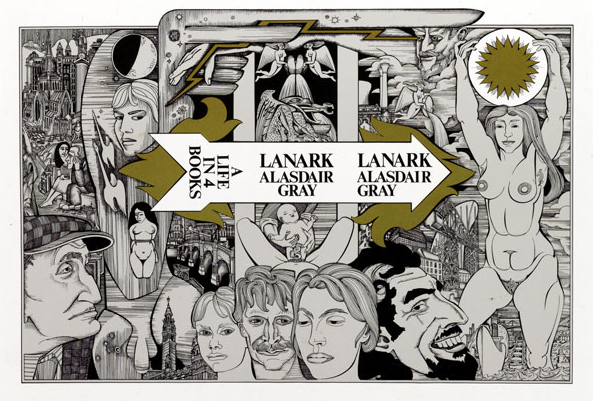